From consultations, through to design, fabrication and global services – we have your Los Angeles trade show needs covered.

Discover all that we have to offer in Los Angeles. Much more than a booth builder – Beaumont & Co. has reinvented the traditional offering of trade show displays. Our customer service team, designers, architects, fabricators and project managers are with you every step of the way. 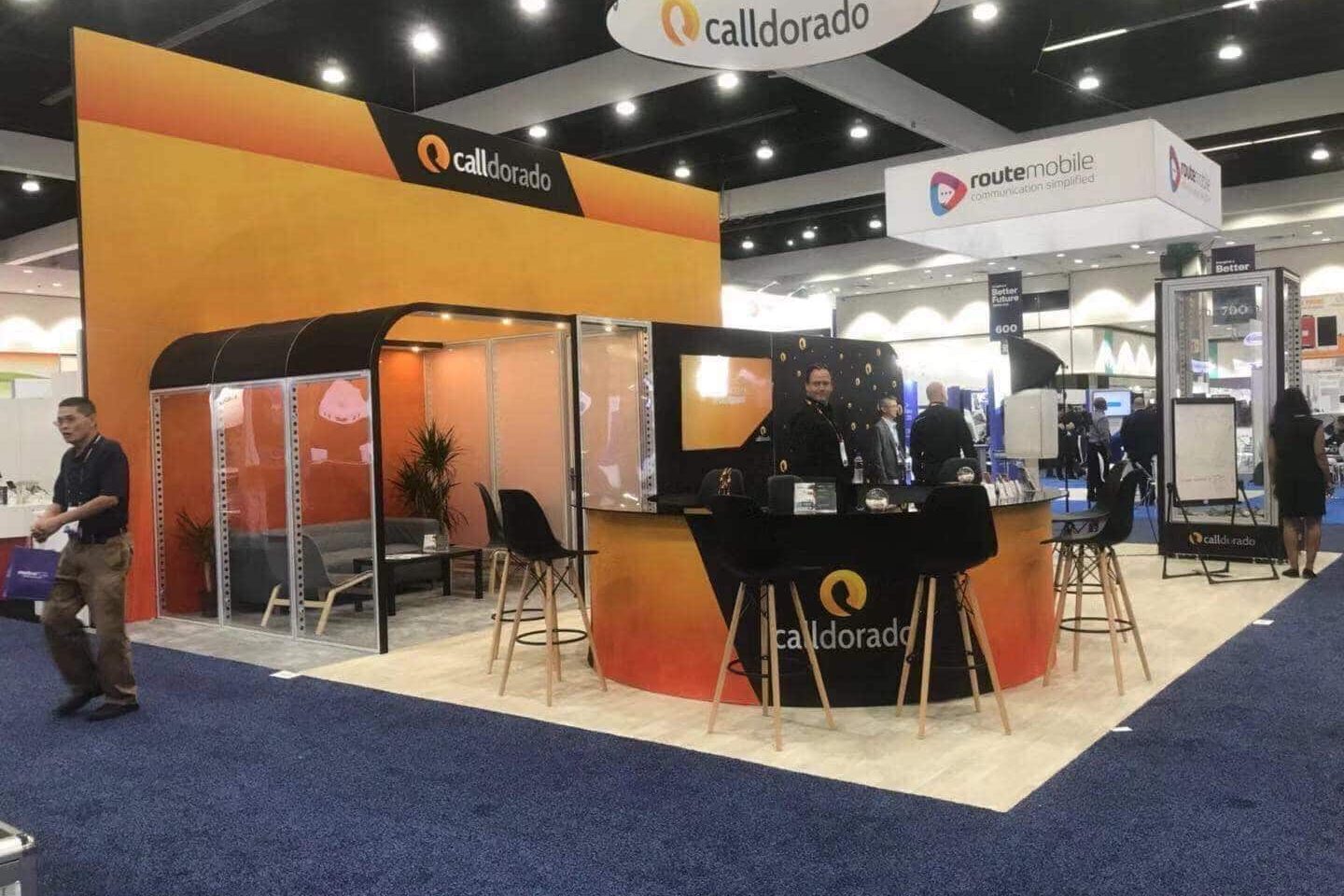 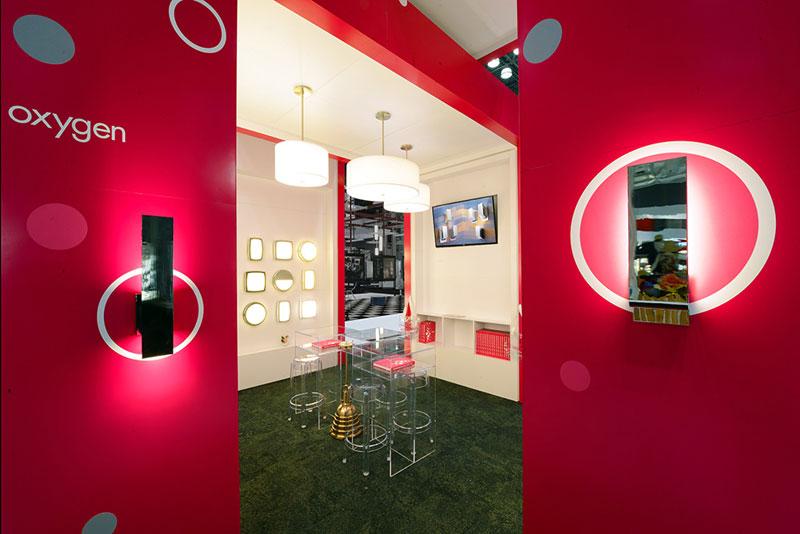 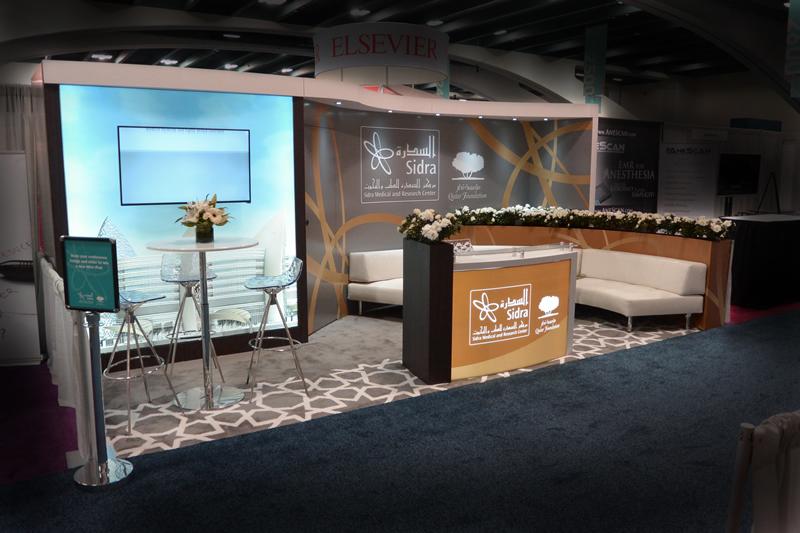 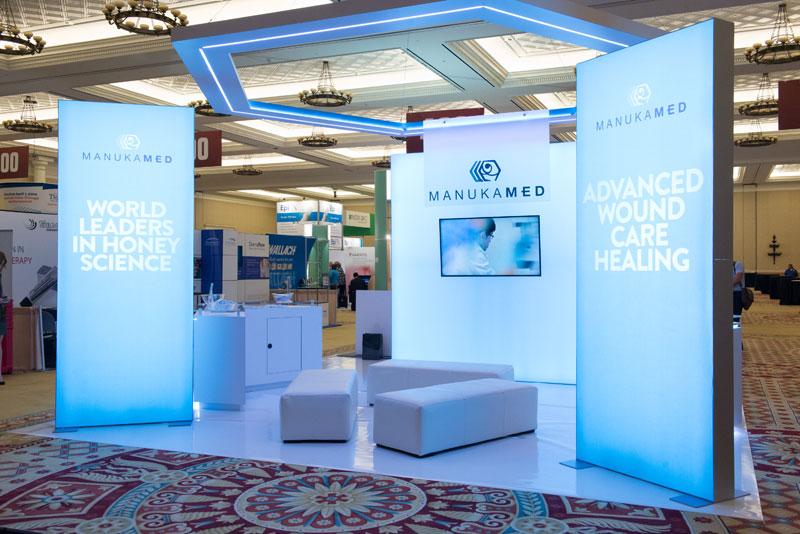 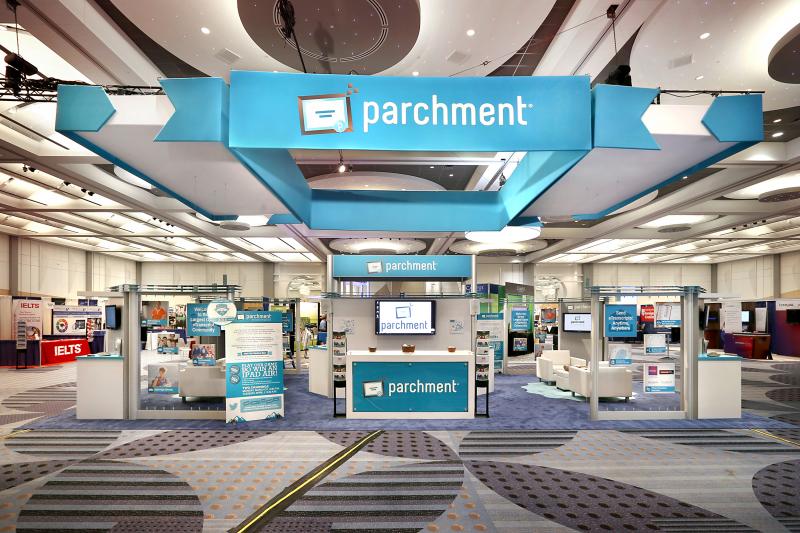 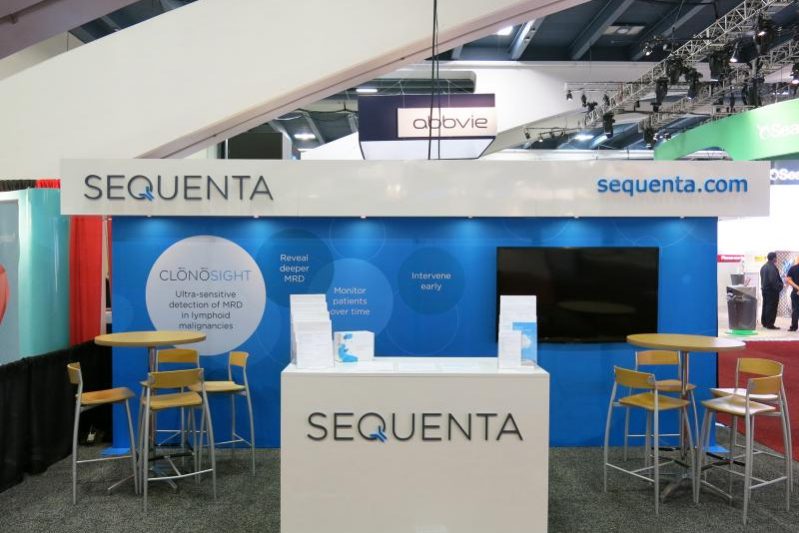 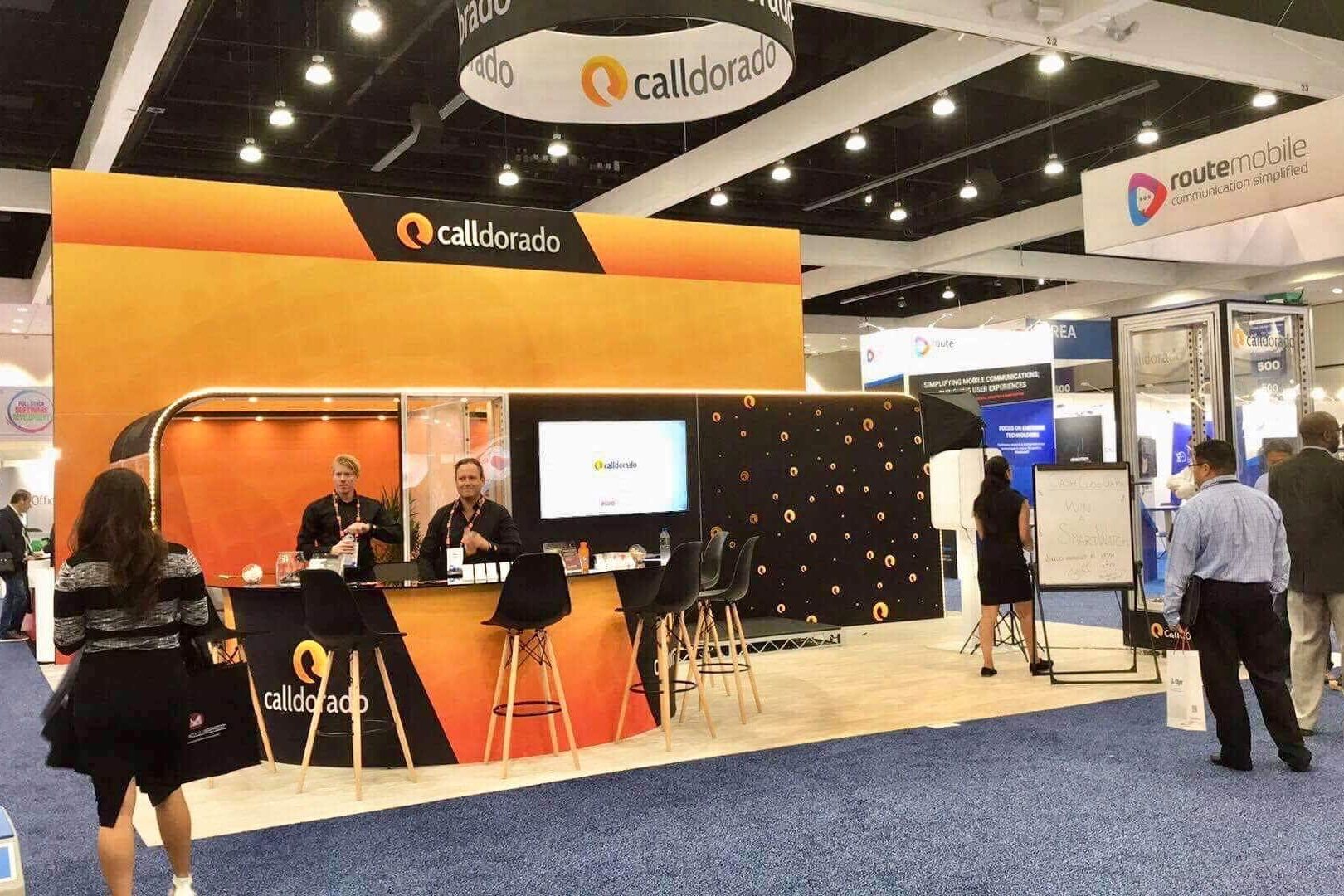 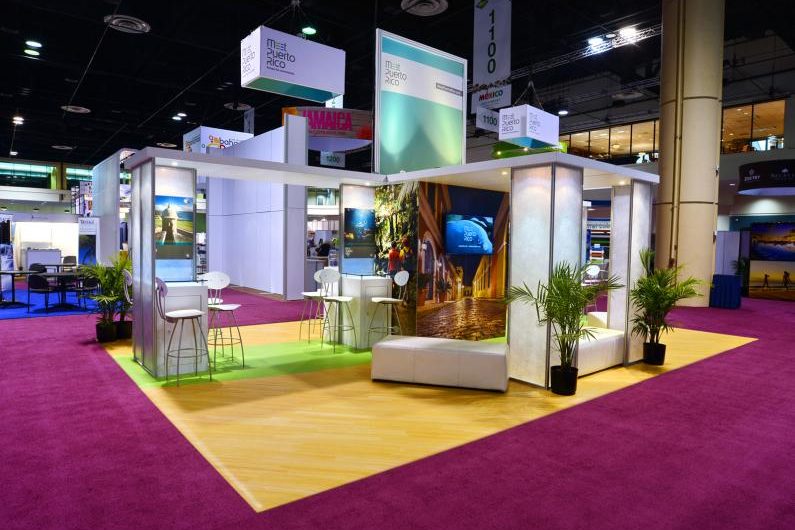 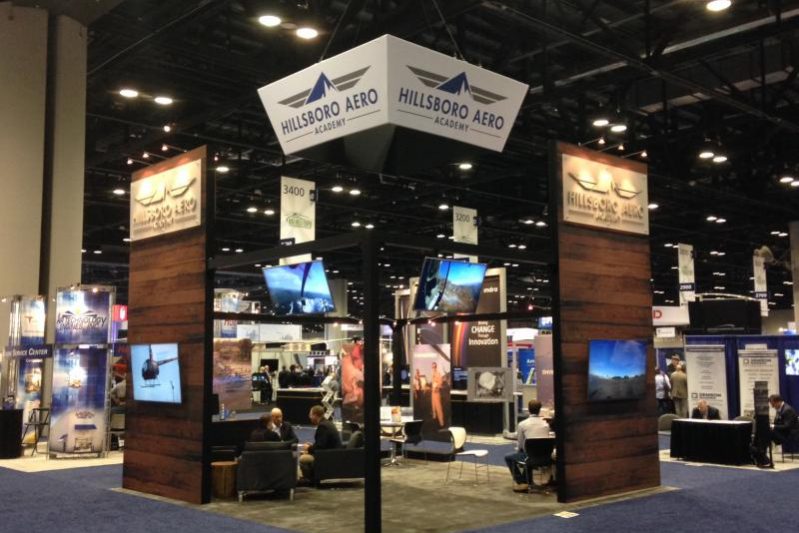 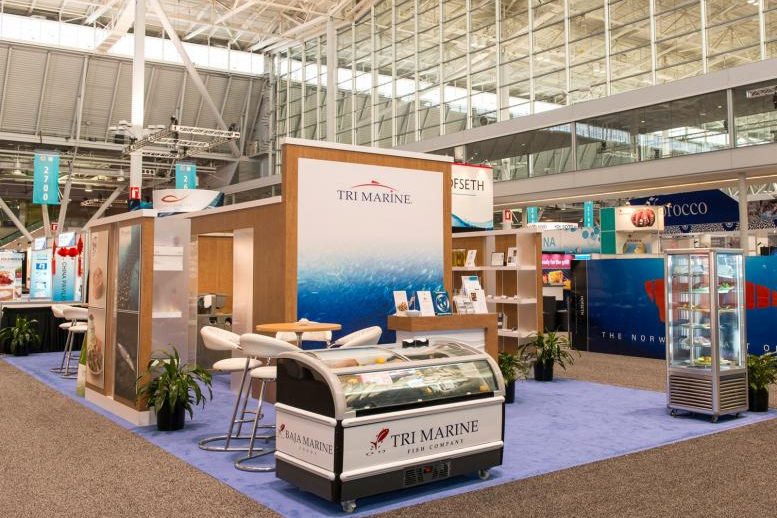 If you are thinking about exhibiting in Los Angeles, it is critical that you exhibit with a high-quality customized trade show stand to ensure you get the attention you deserve from attendees and potential clients. Beaumont & Co. is here to meet your needs with our ability to create and design high-quality, custom exhibits and stands that meet all of your expectations in Los Angeles. We will integrate your thoughts and ideas with what we know will bring you success to ensure you make a strong impression in Los Angeles.
View Details

Here at Beaumont & Co., we understand that many of our clients have various needs and that purchasing a custom display or stand might not be the right option for everyone, which is why we offer a diverse selection of rental products. Trade show display rentals are great for many of our clients and can still be customized to fit your exact and specific needs; they are ideal for short-term use, exhibiting abroad, avoiding exhibit shipping, logistics, and installation, and trying before owning.
View Details

Thousands of stock items to choose from, and a highly skilled design and fabrication team for any of your custom portable display needs! Portable trade show displays are great for 10×10 and 10×20 booths, as well as adding features to larger booths. Portable displays are also widely used for retail signs, event branding, activations, experiential marketing and campaigns.
View Details

At Beaumont & Co. we have a team of expert trade show display designers that will make your trade show exhibit, display or stand a show stopper. We as a team at Beaumont & Co. are prepared to design a project from scratch for you or bring your already existing ideas to life. We will be by your side every step of the way for your Los Angeles event, from installation through to the finishing touches such as lighting and furniture. We cannot wait to provide you with high quality, custom exhibit or stand that will set you apart from your competitors.

Beaumont & Co. delivers state-of-the-art trade show exhibits in Los Angeles. We are known for our turnkey and full-service approach that uncovers opportunities and streamlines the event marketing process.

Here at Beaumont & Co., our expert trade show display designers offer a full suite of services from graphic design through to 3D models, renderings and engineered drawings. We work on everything from small to large projects and involve engineers and contractors when necessary. From the first simple sketches on paper, to fully designed 3D custom trade show display renderings, Beaumont & Co. has the experience and team to turn your ideas into a highly impactful trade show exhibit design that will allow you to stand out and build brand awareness on the trade show floor.

From drawings and 3D Renderings to computer controlled equipment on our shop floor, our trade show displays are brought to life by skilled fabricators who are passionate about quality and uniqueness.

We guarantee a dedicated project manager that will execute every project on time and on budget. Our online project portal, enables ease of tracking progress, timelines, and overall projects.

Our experts don’t stop after installation. We design and develop engagement plans, softwares and technologies that help you market, sell and track your sales and activities at trade shows.

Find out how the quality of materials, fabrication and event services vary dramatically in the industry – and how we ensure to produce the best in Los Angeles.

There are many ways to design a booth, a large amount of material options available, and many ways to deliver trade show and event services. Beaumont & Co. ensures the quality of your exhibit and services are planned, monitored and reviewed so that we deliver the perfect project.

Exhibiting abroad, and in several different cities can be easy. Learn more about how Beaumont & Co. turns the differences of culture, location and languages into opportunities – not obstacles.

Thanks to our extensive on-the-ground experience and partners throughout major convention cities world wide, we are able to offer and manage our turnkey projects anywhere, with the same level of detail we do within North America. No matter where your event takes place, your designated Beaumont & Co. expert will be on site with you.

Look the same at every show – in every city! Our strict, detailed and state of the art design, production and project management procedures enable us to ensure your exhibit is made to exact brand specifications. Depending on the size, location and complexity of your projects, your exhibits could be shipped to site, or built locally with one of our fabrication partners.

At Beaumont & Co. we produce quality trade show displays, stands, and exhibits, suitable for any type of event, from simple in-store promotions to large exhibitions around the world.

When you partner with Beaumont and Co., you can be sure that you working with Los Angeles’ best trade show exhibit company. You can be rest assured knowing that we will be with you every step of the way, from quotes and conceptual design to the onsite installation and dismantling.

We take pride in our attention to the smallest details and our commitment to excellent customer service that is second to none. Whether you simply need a small display produced or are in need of a large exhibition or retail project, whether that be the purchase of a trade show display or custom rental, we are confident that we can provide you with the exceptional customer service you deserve.

Los Angeles, often referred to as LA, is a beautiful southern Californian city, with a population of 4 million people, it is the second largest city by population in the United States. The economy of this culturally diverse city is largely driven by international trade, and of course, the entertainment industry. The entertainment industry in Los Angeles is widely known all over the world and is where Hollywood is located, a true entertainment sector hub. Hollywood is also a very large tourist attraction, with the Hollywood Walk of Fame, many celebrity sightings, and luxurious shopping.

Similar to many other large US cities, Los Angeles is home to many professional sports teams such as LA Dodgers, LA Angels, LA Lakers, LA Kings, and the list goes on. Los Angeles has many attractions to bring people to the city, and it makes it a great location to attend a trade show, convention or event, with there never being a dull moment in the beautiful city.

If you are needing assistance with any of your Los Angeles custom trade show exhibits needs Beaumont & Co. is here to help! We are a full-service custom trade show exhibit company who attends many conventions and events annually. We can provide you with a beautiful custom display to set you apart from competitors at your next Los Angeles convention. We always recommend our clients to start their design process ahead of time in order to allow everything to go smoothly, with little to no stress or setbacks.

Largest Industries We Work With In Los Angeles

A leader in the Los Angeles Aerospace & Defence trade show and event industry, we are the to-go provider of trade show displays for industry-leading companies.

From exhibit design, through to booth construction and installation – we can handle your every need for your furniture, interior design and decor trade shows and events in Los Angeles.

We handle your every trade show, conference and event need within the Los Angeles technology scene. From venue selection, to program design, exhibit, signage and print material design and production.

In Los Angeles, machine and fabrication trade shows and conferences are popular and connect you with buyers, partners and leaders within the United States machine industry.

Aerospace, security, defense, and military are all a part of the wider security industry, and Beaumont & Co. is equipped to handle your every trade show, conference and event needs in Los Angeles.

Pharmaceutical, drug and medicine is an important industry inLos Angeles, and we host several large trade shows, conferences and special events. We are the go-to supplier of such events.

Advertising, marketing and branding is always evolving and Los Angeles is leading the way with conferences, events and trade shows that inform and educate on the fast changing industry. We are a preferred supplier to these events.

Transportation, shipping and logistics are always improving, and there is trade shows and events in Los Angeles that are crucial to the growth of the industry. Contact us for your event needs!

Beaumont & Co. were professional, accommodating and dedicated to the success of our project. From the design phase through to execution, their attention to detail and customer service was first-rate, embracing our brand and providing practical advice to ensure a cost-effective yet attractive solution that met our objectives.

There is nothing that compares as the Beaumont & Co. booth system; it will be in my mind or even should be the industry standard. Our booth was revered by all who came upon it. In fact a comment I heard from a passer by was “Now that’s a booth!” comparing it to all the thousands other booths at the Las Vegas AHR convention

The Canadian Defense, Security and Aerospace Exhibition Atlantic: DEFSEC Atlantic is Canada’s second largest defense and aerospace trade event. We cater to some of the world’s largest defence contractors in the world. We have no hesitations in recommending Beaumont & Co. to them as a provider of quality display materials. The feedback we received has been most positive and we are looking forward to a long relationship with Beaumont & Co. as they grow their business.

Beaumont & Co. was great to deal with in that they incorporated all our design suggestions in a timely fashion and their superior customer service made the this process very relaxed and straightforward. The final products turned out nicely and to our satisfaction – the displays look professional and high-quality. The banner’s LED component allows us to stand out at trade shows/career fairs. They went the extra mile and set-up the display for us on two separate occasions which was very much appreciated. They have also responded to additional follow-up queries related to the products. All in all, we are quite happy with the end product and experience on a whole.

MetOcean Telematics appreciates working with Beaumont & Co. for our trade show needs. Beaumont & Co. understand the complex nuisances of the industries in which we do business and have played an important role in helping us present our products to client worldwide.

Fantastic company to work with. Their attention to detail and deadlines is second to none. Very pleased with my experience!

Kaley MacDonald – Seafood Marketing Officer, Department of Agriculture & Fisheries
Go to Top
This website uses cookies to improve your experience. We'll assume you're ok with this, but you can opt-out if you wish.Accept Read More
Privacy Policy
Necessary Always Enabled
Now offering free ONLINE design consultations. Design options vary by location due to the novel coronavirus (COVID-19). We want you, our client, to feel safe. Select the option that best fits your comfort zone, and works within community restrictions currently in place. Request a quote or call us for more details. Call 1 (877) 236-7923
Request a Quote Within 1 Hour